In the previous two issues of the Connors Research Traders Journal, Chris Cain and I made a compelling case why every trader should be doing their trading strategy development and research in Python on Quantopian.

There are many advantages for you to program in Python including it’s faster, simpler, open source, and broadly used by tens of thousands of professional traders around the world including many who trade for the best quantitative trading firms globally. Being open source, you have the advantage of using many of the same tools as the industry leaders do.

If your objective is to move from the closed source retail world like Amibroker and TradeStation and move into the open source, professional trading world, programming in Python is the single best way to get there.

To show you the elegance and simplicity of Python combined with Quantopian (or any other Python-based testing platform), Chris and I created the following trading strategy this past Friday afternoon after the market closed.

We started at approximately 4:30 pm ET and by 5 pm we built a strategy in SPY that outperformed buy and hold over the past 12 years, plus had far lower volatility, while only being long US stocks less than 16% of the time!

Firms spend weeks, months, and years looking to do things like this. We did it in 30 minutes because we had the knowledge, combined with Python language skills, and Quantopian’s database. In my opinion, if you have the same resources, there’s a high probability you can do the same.

Our Objective For This Test: Build A Strategy That Allows One To Achieve Market Returns (Or Greater) While Significantly Lowering The Risk of Buy and Hold

We asked a simple question at 4;30 PM on Friday: could we build a strategy to equal buy and hold without taking on all the risk of buy and hold.

To do this we first needed to see just how much risk has there been in buy and hold since 2007.

In under 5 minutes, starting from scratch, Chris wrote the code and generated the following data from Quantopian for us to analyze. 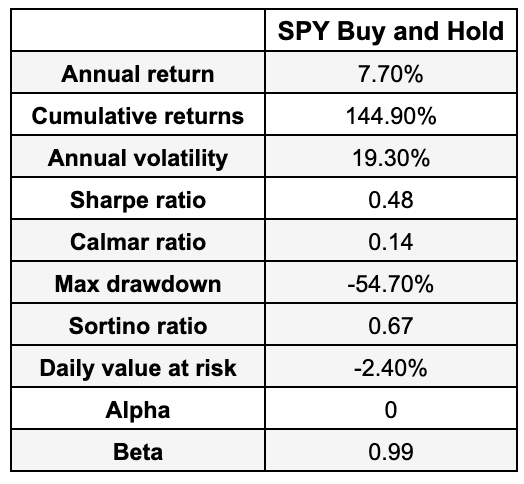 It’s ugly out there when markets drop!

Quantopian shows this in multiple forms from the 5 max drawdowns, to the high volatility, to the time underwater it takes to recover from losses.

While the S&P 500 has been in a bull market for most of this time, there was the drawdown of nearly 55% during the global financial crisis of 2008/2009. Notice rolling six-month volatility during this time reached a peak of over 50% annualized! Also, notice that it took the market years following the crash to make new highs. This is easily observed in the list of worst drawdowns, while the “recovery date” post 2008 didn’t happen until August 2012.

Could we have avoided those drawdowns without curve fitting a strategy, while still participating in the long term market rise?

From years of research, we know four truths:

With this in mind, we added two simple rules to the buy and hold strategy.

Total time to write the two rules in Python on Quantopian? 10 minutes. 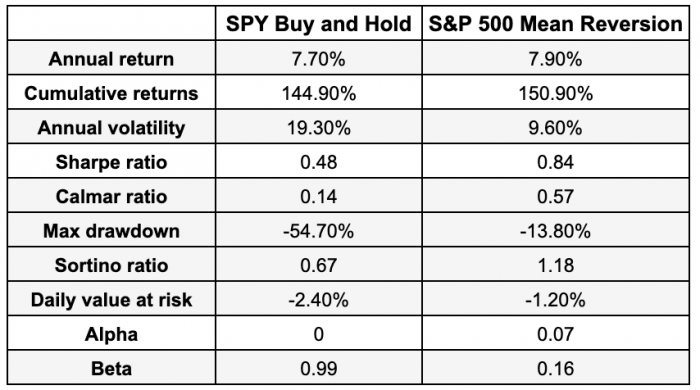 Analysis – An across the board improvement. Higher returns, lower volatility, much higher Sharpe Ratio, 75% reduction in the drawdown and the Daily value at risk was cut in half.

Analysis– Far lower volatility. In fact, volatility was cut in half.

Analysis – Much faster recovery time to new equity highs in the portfolio. No one likes being underwater! This strategy significantly lessened the time to making new highs.

The Results Speak For Themselves

Our very simple strategy, constructed and written in Python, and tested on Quantopian produced much better risk-adjusted returns. Total time to do this – under 30 minutes!

Would You Like To Do This Type of Research and Strategy Development For All Your Trading Including Intra-day Trading, Short-term Trading, Momentum Trading, Portfolio Development, and More?

Attend our Free Webinar on Tuesday, March 5 at 1 pm and learn how you can program in Python like the top professional traders in the world.  Click here to sign up for our Programming in Python for Traders webinar.

Larry Connors has over 30 years in the financial markets industry. His opinions have been featured at the Wall Street Journal, Bloomberg, Dow Jones, & many others. For over 15 years, Larry Connors and now Connors Research has provided the highest-quality, data-driven research on trading for individual investors, hedge funds, proprietary trading firms, and bank trading desks around the world.

Connors Research Traders Journal (Volume 57): 7 Real-World Reasons Why Short Strategies Should Be Included In Your Portfolio

In our new book, The Alpha Formula – High Powered Strategies to Beat the Market with Less Risk, we show the benefits of including short-strategies in your portfolio. As a reminder, building portfolios should be based on First Principles – otherwise known as truths. These truths are: Markets Go Up Market Go Down Markets Go… [Read More]