You are here: Home / Recent / A Better Way To Protect Your Capital

This past week was a historical week for the market on a number of fronts. The velocity of the decline in such a short period of time has rarely been seen and in a few cases never been seen before when the market was above its 200-day moving average.

There was also excessive “hedge fund herding” into a handful of large cap technology stocks which masked the narrowness of the 2020 rally.

Plus the world has changed to a degree because of zero cost trading. It has brought in tens of thousands of unsophisticated, mostly millennial speculators who are using the markets as a gambling casino and creating increased volatility and volume into the fastest-moving stocks like Tesla.

Having lived through and traded through large one-time events such as the 87 crash, the 2000-2002 internet bust, the 2008 financial crisis, and numerous other events, it’s a lot easier to keep things in perspective. The one thing I know is that anyone over the past week who was going on CNBC or the other financial networks and were “picking bottoms” were irresponsible. No one knows when a bottom will occur after a shock to the system, especially one that involves a virus that has never been seen before.

What this week brought was further clarity to the “First Principles” we introduced in our book The Alpha Formula. These First Principles (truths) are the only truths in the financial world. These truths are:

The majority of money being managed around the world is highly dependent on number one.

They look at rising markets over the past decade and they look at how markets have recovered after major sell-offs, and they continue to recommend you buy, buy, buy.

It’s a good strategy when prices rise but it’s an incomplete strategy when markets decline and when they go through times of stress. Go look at the past 7 business days performance of the “best in breed” funds and you’ll see devastation, in some cases double digits losses in investors capital in only a few days. Buy, buy, buy works until weeks like this.

On Thursday night on CNBC, Bloomberg and other networks, all you saw were “professionals” who were blind-sided and were now advocating “slowly buying here again”. Maybe they’ll have their timing down and be correct or maybe they’re making the same mistake that was made in the first quarter of 2008 buying stocks ahead of what turned into a more than 55% drawdown in the S&P over a 15 month period of time. They’re guessing…no one knows!

There Is A Better Way

There’s a better long-term way to trade and invest your money.

It’s acknowledging ahead of time that no one knows where the market is going to be 3 months, 6 months, or a year from now. If they did, they’d load up on highly leveraged futures, let their prediction play out, and then surpass Jeff Bezos as the richest person on the planet!

The First Principle we’ll focus on today is for the times when markets go through times of stress.

We showed conclusively that whenever equity markets go through times of stress in the US the flight to safety has been into US Treasuries.

This past week we saw this exact same behavior again. As the market sold off, treasuries spiked higher. In The Alpha Formula, we showed this same behavior looking at the worst quarterly returns in the S&P and then compared those returns to the returns in long-term treasuries.

Here’s what that chart showed: 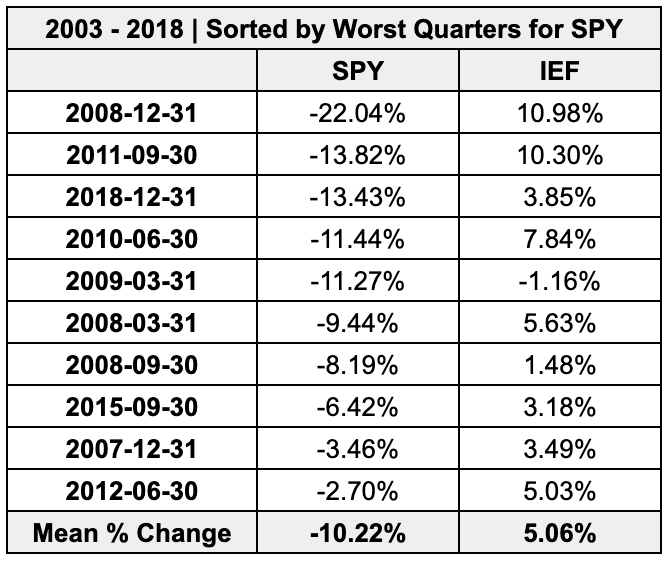 This past week we see the exact same behavior and it’s a consistent pattern!

For this test, we looked at the market (SPY) only when it was above its 200-day moving average since 2002. Therefore we are especially focusing on bull market conditions just like the conditions we were in up until Thursday, February 27.

The question we asked was, during bull markets is there still a flight to safety, especially over a very short-term time period?

The reason for doing this goes back to the premise that no one knows when times of stress will occur and therefore is it best to own treasuries “ahead of time” in order to protect the portfolio from these unforeseen events.

Here’s what the data shows: 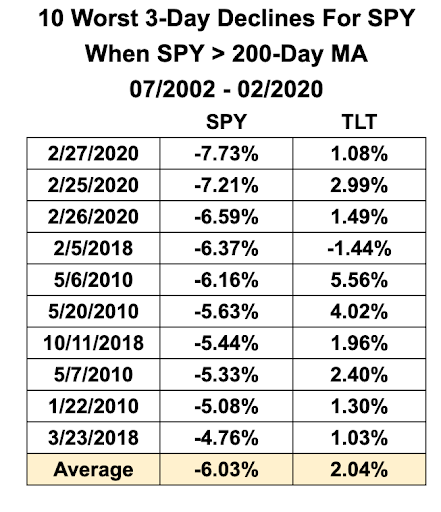 There are a few things of note.

Yesterday we did our monthly webinar for people who have read The Alpha Formula. I asked how many people had capital allocated to treasuries. The majority of the attendees typed in that that they did.

They were wise enough to apply First Principles and know that markets do go through times of stress and for decades Treasuries have won when this occurs. They didn’t “guess” when those times of stress would occur. They pre-set their portfolio to be there when it occurs.

This type of portfolio construction is far wiser than owning a portfolio of assets which are dependent on long term bull markets. The downside to it is that the portfolio will likely underperform in a raging bull market because it has capital allocated to bonds and to potential short positions.

The upside to it is what we showed in The Alpha Formula, backed by historical test results beginning in 2003. The risk-adjusted returns are often far greater, especially with the right strategies in place.

Today, instead of looking at a portfolio or retirement plan that lost up to double digits in a week, you have a portfolio that has smoother, less volatile returns than the long-only crowd.

Long portfolios only win in bull markets but create stress and damage when markets go down and through times of stress.

Portfolios applying First Principles are built for the long-run with the objective of achieving long-term consistent returns no matter what the market brings.

If you’d like to learn more on how to build a portfolio based on First Principles, and also based on Quantamentals which combine fundamental analysis with technical analysis along with quantitative analysis to stack edges in your favor, you’re invited to a free webinar we’re holding this Tuesday, March 3 at 1 pm ET.

We were recently awarded the 2020 Charles H. Dow Award from the Chartered Market Technicians Association for our work on Quantamentals and you’ll have the opportunity to learn how it can be applied to improve your trading and investing.

Please click here to register for the free webinar.

We look forward to seeing you on Tuesday.